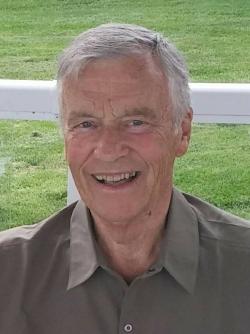 William "Bill" David Ross of Boundary Creek, NB, surrounded by his loving family, fell asleep in the Lord on January 9, 2017 at the Moncton City Hospital.

Born in Charlottetown, PEI, on August 2, 1941, he was the son of the late Rev. Robert W. Ross and Lola (Garrett) Ross, who ministered faithfully for many decades in Presbyterian Churches across New Brunswick, bringing Bill life-long memories and friends in Bass River, Tabusintac, and Sunny Corner.

Bill was a devout Christian and an elder at St. Andrew’s Presbyterian Church. His great desire was to see the Gospel presented clearly. He held firmly to the Historic Christian Faith and battled courageously against those who would destroy it. Above all, he loved His Lord and Saviour Jesus Christ and adored the Holy and Blessed Trinity.

Bill had a long and successful career as a teacher and principal at Harrisville School and Arnold H. McLeod School, from where he retired. His love of children was reflected even after retirement in his many years of service at St. Andrew’s Church in which he shared the message and hope of Jesus Christ to the children and youth, including his precious Pioneer Club.

Bill loved spending time with his family, sharing many happy and memorable times together; he enjoyed practicing karate with his friends at the Oscar Leger School of Karate (especially Wayne!); and hunting with his brother. He was proud of his Scottish heritage, and looked forward to day trips with his siblings, Marilyn and Malcolm, when they would fondly revisit childhood locations.

Bill’s battle is over; the victory has been won. We look forward, by God’s Grace, to meeting him again "upon another shore and in a greater light, with that multitude which no man can number, whose hope was in the Word made flesh, and with whom we for evermore are one."

Bill would love to share a hymn by one of his favourite poets, Rev. Horatius Bonar:

Upon a life I did not live, Upon a death I did not die,
Another’s life, another’s death,  I stake my whole eternity.
Not on the tears which I have shed, Not on the sorrows I have known,
Another’s tears, another’s griefs, On these I rest, on these alone.
Lord, I believe; O deal with me, As one who has Thy Word believed!
I take the gift, Lord; Look on me, As one who has Thy gift received.
"The Blood of Jesus Christ, His Son, cleanseth us from all sin" 1 John 1:7b.

If desired, memorials to the Child Evangelism Fellowship would be appreciated by the family.