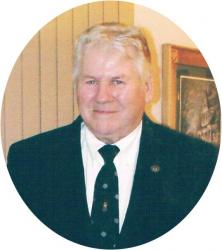 Caleb Sprague Dunn, 84, of Salisbury, passed away Monday, May 28, 2012 surrounded by his family at the Moncton Hospital.

Born in Prosser Brook, he was a son of the late Frank and Ida (Geldart) Dunn.  Caleb was in the mobile trailer sales industry since 1955 as a former Co-Owner of Maritime Auto and Trailer Sales and a former owner of CRC RV Center. He was a pioneer member of the Citation and Corsair Trailer Clubs of Canada and a past president of the Moncton Mobile Homes Association.  A lifelong fan of stock car racing he was a driver for over 30 years winning over 200 races on tracks in the Maritimes and eastern U.S..  He was inducted into the Moncton Wall of Fame in 2001 and the Maritime Motor Sports Hall of Fame in 2006.  In his leisure time he enjoyed hunting, fishing and gardening and enjoyed many winters in Florida.

Resting at Salisbury Funeral Home, 3350 Salisbury Road (372-4800) with visiting Wednesday, May 30,  2-4 and 7-9 pm and from where the funeral will be held Thursday, May 31 at 11 am in the chapel with Rev. Rob Nickerson officiating.  Interment to follow at Fair Haven Cemetery.

If desired, donations to the Canadian Cancer Society or Friends of the Moncton Hospital would be appreciated by the family.