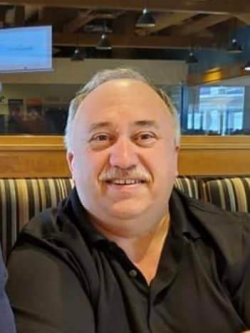 It is with great sadness the family announces the sudden passing of Daryl Stevens, 61, of Steeves Settlement on December 5, 2022.

Born in Moncton, he was a son to Ruth (Branscombe) Stevens and the late Paul Stevens.  He graduated from Petitcodiac Regional High School and attended UNB Fredericton. In his early working years and onwards, he worked for various radio stations. Starting in New Brunswick, he worked in radio in high school, he worked at the Campus Station at UNB, CFNB, and CIHI Fredericton where he was the Music Director. He went on to become Operations Manager at Newcap in Cornerbrook, Newfoundland and then as Program Director in Sydney, Nova Scotia. The last few years Daryl had moved back to Steeves Settlement and had semi retired but yet was still working for Geeks Unlimited in Computer Service. Daryl enjoyed tinkering and fixing anything electronic, spending time on the ham radio and he loved his Porsche. He was also a great conversationalist where he could spend hours talking to friends, neighbour Jim, coworkers and family about everything.

Daryl is survived and sadly missed by his mom, Ruth Stevens of The Glades; his sister, Cynthia (Dave) of Fort McMurray, AB; his brother, Dwayne (Christine) of Steeves Settlement; nieces and nephews, Sarah, Jacob, Mackenzie, Callie, Jared, Sierra, Marisol and Cody; great nieces and nephews, Wyatt, Brooklyn, Maverick as well as countless friends and coworkers. He is predeceased by his father, Paul Stevens.

Resting at Salisbury Funeral Home, 3350 Route 106 (372-4800) visiting will be Friday, December 9 from 6 to 8 pm and from where the funeral will be held on Saturday, December 10 at 11 am with Rev. Kevin Carr officiating. Interment in Steeves Settlement cemetery at a later date.

If desired, donations in memory of Daryl to a Local Food Bank would be appreciated by the family.

Online condolences and donations at www.keirsteads.ca

Please click here to view the celebration of life service livestream on December 10, 2022 at 11am.