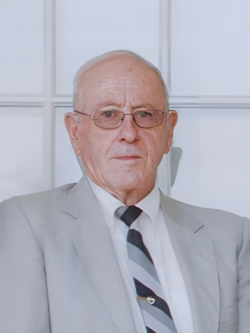 Born in Moncton, he was the son of the late Roderick and Susan (Dobson) Murray. Allison had his own business in Logging & Construction, starting Murray Woodlands in the early 1950's, which his family continues to operate. An outdoorsman, he liked four-wheeling, snowmobiling, mowing lawns and plowing snow. Allison also enjoyed a good kitchen party with music. He was a member of the Petitcodiac Baptist Church.

Resting at Salisbury Funeral Home, 3350 Route 106 (372-4800) visiting will be Wednesday, October 5 from 6 to 8 pm. The funeral will be held at Petitcodiac Baptist Church Thursday, October 6 at 2 pm with Rev. David Woodworth officiating. Interment in Maplewood Cemetery.

If desired, donations in memory of Allison to the Heart & Stroke Foundation, Friends of the Jordan LifeCare Centre or a charity of choice would be appreciated by the family.