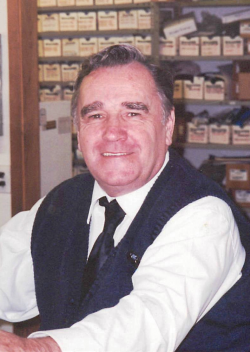 Douglas (Doug) Duff, 78, of Salisbury passed away Wednesday, September 28, 2022 at the Moncton Hospital.

Born April 4, 1944 at Elgin, New Brunswick, Doug was a chosen Son of Charles T. and Margaret ( Howatson ) Duff of Moncton and the Son of Nina Hicks of McKees Mills.

Doug was the former operator of the River Glade Irving, River Glade, a co-owner of

Mikes Restaurant, Moncton, and owner operator of Mohawk Campground on Grand Lake. He was a people person and enjoyed working around and with people. He enjoyed his last employment with Elections New Brunswick and all the great people he worked with there.

Doug was very community minded and served on the Salisbury Village Council, former Vice Chairman of the District #16 School Board, Past President of the Salisbury Public Library and other organizations.  He was a former standard bred horse owner, driver and trainer and the former General Manager of Brunswick Downs.  Doug was a past Master of Salisbury Lodge F & A.M. and a current member of Coverdale Lodge #52.  He was also very proud to be the Treasurer of the Irishtown Lions Specialty Club. He considered himself lucky to have met so many great people in his lifetime. Doug will be missed by many friends. He attended Full Gospel Assembly in Killam’s Mills and was blessed by their fellowship.

The family would like to express their thanks to the many friends who spent evenings with Doug over the past few weeks and to the staff of the Palliative Care Unit at the Moncton Hospital. A special thanks goes to Danielle and Michelle.

If desired, memorials to Full Gospel Assembly of Killams Mills or Friends of the Moncton Hospital Palliative Care would be appreciated by the family.

Online condolences may be made at www.keirsteads.ca

Please click here to view the celebration of life service livestream on October 1, 2022 at 1 pm.