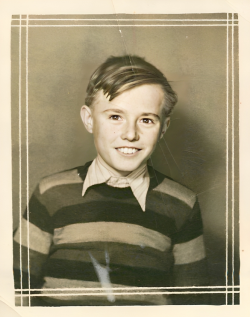 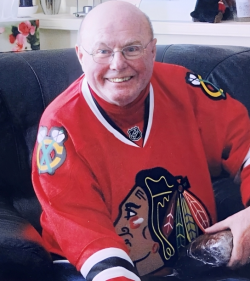 The Chicago Blackhawks have lost one of their most dedicated and loyal fans. Grant Winston Colpitts passed away at the Albert House Hospice in Moncton on September 18th, 2022. Grant was born on November 20th, 1940, to the late Leigh and Annie (Fenton) Colpitts.

Grant grew up on a farm in Salisbury NB. He was the youngest of seven children. After graduating from the Salisbury Regional High School in 1958, Grant moved to Truro to attend the Nova Scotia Agricultural College. He went on to complete his Bachelor of Science at MacDonald College in Montreal in 1965.

Grant started his career with the NB Department of Agriculture in Moncton as an assistant Agriculture Representative. Later, he moved to Fredericton to become an Agriculture Representative. In 1972, Grant returned to his home farm in Salisbury to work with his father, Leigh. Together they raised fox, mink, dairy and beef cattle. Grant was involved in many organizations that promoted agriculture over the years. He was the president of the NB Federation of Agriculture. He was the vice-chairman and a charter Member of the NB Dairy Producers Association. He was also involved with Milk Management, NB Fur Farmers Association, Canadian Fox Breeders Association, and the Canadian Agricultural Institute. Grant was also interested in politics. In 1978, he took time away from the farm to run as the Liberal candidate for the County of Albert. He loved meeting new people during this endeavor. Grant also volunteered in the community with the Salisbury Lions Club, the Salisbury Fire Department and a life long active member of the Salisbury United Church.

Grant became an instructor with the NB Community College in Woodstock with the Agriculture Department. The connections and friendships he developed during these twelve years were important to him. He enjoyed running into former students or fellow instructors.

In 2001, Grant retired and returned to Riverview to concentrate on his honey-do list, spend time at the lake with family and friends, and participate in lively debates over coffee with friends. Grant was young at heart and his humour and wit made him a great storyteller.

Grant’s family would like to thank the staff at the Driscoll unit and the Moncton Hospital for their compassion and care. They would also like to express their gratitude to the caregivers at the Albert House Hospice on Pleasant Steet.  Their professionalism and empathy provided comfort during a difficult time.

Donations to the Friends of the Moncton Hospital Foundation or Albert House Hospice would be appreciated.

Online condolences and donations may be made at www.keirsteads.ca

Click Here to view the celebration of life service livestream on September 26th at 11 am.