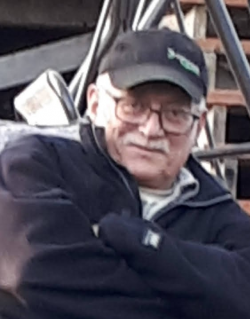 We regret to announce Jerry Joseph Gallant passed away at the Halifax Infirmary, N.S. July 5th, 2022, at the age of 72.

Born in Summerside, PEI, January 27th, 1950 to parents, Ben and Eva (Trenholme) Gallant.  He will be so very much missed by his wife, Janet (Cameron) Gallant, daughters Jana Gallant (Dale Popowich) and Stephanie Ogilvie (Brock Unger) and son Jason.

Also, will be sadly missed by his sister, Diana (husband, Bill Patterson) and brother Terry (wife, June), nieces and nephews and cousins.

Predeceased by his parents, Ben and Eva; stepfather, Edgar and infant daughter Jill.

Jerry adored his family, they were very close.  The kids meant the world to him and he so very much enjoyed hearing of their challenges and successes.  Always quick to offer advice and very proud of their accomplishments.  Jana could always make her Dad giggle and Steph would ask and receive ‘honest’ critiquing of her food creations.  He loved the phone calls with his Sister, Di and calls from Brother, Terry talking about just everyday life.  Janet and Jer were married nearly 27 years but had a great 34 years together filled with so much love and good times (except when he beat her in crib … constantly.)

Jer had loyal, long-time friends, Gary and Marie Anne Nason, John and Bernie Splude and Robert Thorne who were more like family to him than friends.  He met and made friends with so many of his clients when he owned the Blind Spot.  He loved meeting people, was a born salesman and an entrepreneur who was never afraid to start something new and make a success of it.  He loved the outdoors, 4-wheeling and the many shepherds he owned over the years.

The family would enjoy seeing you at an informal drop in to receive relatives and friends at the Salisbury Funeral Home & Crematorium (372-4800) July 13th, Wednesday from 1:30 to 3:30 pm.

For those who wish to do so, donations may be made to the Canadian Kidney Foundation.

Messages in memory of Jerry may be directed to:  www.keirsteads.ca