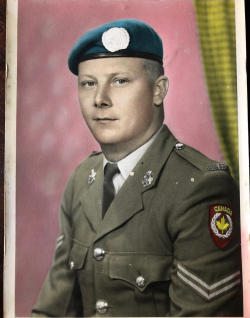 Darrell Everett Tingley, 86 of Elgin passed away suddenly on June 28, 2022 at Forest Dale Nursing Home.  Darrell was born in Lower Cape, New Brunswick on June 3, 1936 the son of the late Everett and Maisie (Reid) Tingley. Darrell was a veteran and proud member of the Canadian Army serving in Canada, as well as Germany and Cyprus. He was an avid world event enthusiast and a big sports fan, watching hockey and baseball on TV. He really enjoyed watching hummingbirds and made sure that his feeders were always full. He will be remembered for his sense of humor, his quick wit and fantastic storytelling that were a welcomed addition to family gatherings.  Darrell was well-

travelled during his two tours in Germany and Cyprus and had many stories about his adventures through different countries and through the fun and various misadventures both he and Joan encountered along the way.

He really enjoyed seeing his nephews Mike and Bobby Tingley when they would ride their bikes out to Elgin.

He will be deeply missed by his former wife, Joan (Kane) Tingley of Riverside Albert; daughter Donna Lynn Harvey (Mike) of Halifax,  son,  Andrew Tingley of Halifax, granddaughters Karla Harvey and Amy Harvey of Halifax, sisters, Pauline Lusby (David) of  Amherst,  Kathy Underhill (Robert) of Hubbards, Cheryl Nelson (Keith) of Hillsborough, Sandra Tingley of Sussex and the Kane extended family. Besides his parents, he was predeceased by his brothers, Winston, Burton and Melvin Tingley.

By request there will be no service following cremation. Arrangements are in the care of Salisbury Funeral Home and Crematorium (372-4800).

If so desired memorials to a charity of choice would be appreciated by the family.