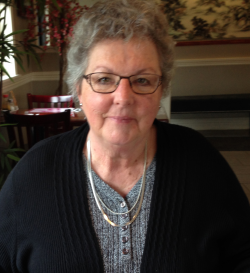 With sadness and profound sense of loss, we announce the home going of Gloria Lea (Trites) Wilson in the early morning hours of June 21, 2022. She had recently been diagnosed with Acquired Hemophilia A, a rare and serious blood disorder. Gloria was born in Moncton of December 31, 1943. She was the third daughter of the late Clarence and Carrie Trites.

Gloria grew up on a dairy farm near Moncton and attended a one-room school before transferring to Moncton High School, where she graduated in 1961. Following high school, she graduated from Oulton Business College and worked for several years with two professional engineering firms, Moore and Cowan and R.G. Cowan and Associates. Later she was employed by Indiana Wesleyan University in Indianapolis and with The Wesleyan Pension Plan in Marion, Indiana.

In October 1965 she married HC (Harry) Wilson and they completed 56 years of marriage a few months ago. Gloria spent nearly 50 years as a partner in ministry with her husband as they served Christ and The Wesleyan Church in New Brunswick, Nova Scotia, Alabama, Mississippi and Indiana. They retired to New Brunswick in 2017.

Besides her parents, she was predeceased by her sister Carole (Norman) Lutes and niece Laureen Landers.

A Celebration of Life service will be held at the Beulah Tabernacle, Browns Flat, NB on Wednesday, July 6th at 2:00pm. A private family burial will take place at a later date at Birchhill Cemetery. In lieu of flowers, memorial gifts to Beulah Camp and Conference Center or World Hope Canada would be welcomed. Arrangements have been entrusted to the care of Salisbury Funeral Home (372-4800).

Sincere appreciation to the doctors, nurses and staff at The Moncton City Hospital, especially on 4100 and 4200 for the incredible love and care shown to Gloria. We are grateful.

Online condolences may be made at www.keirsteads.ca