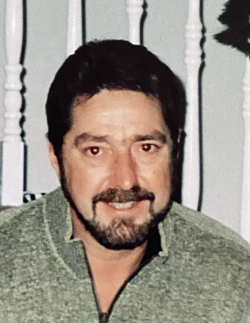 The family of Rick Arsenault, of Fort McMurray, announces his passing on June 7, 2022. Born in Havelock, NB, he was a son of the late Albert and Sophie (Wedge) Arsenault.

Rick was a talented musician and spent many a night entertaining friends and family around campfires and in kitchen parties from New Brunswick to British Columbia and all places in between. Rick never met a stranger in his life. His daughters learned early on that a quick trip into the store would always turn into a thirty-minute ordeal because Rick would inevitably run into someone he knew and want to have a chat.

Rick was very proud to come from Havelock and every time he came home for a visit, which was often, he looked forward to taking trips down memory lane. That was usually accomplished by driving through town and recounting all of his childhood adventures or popping in for a visit with his life-long friend Mike.

Rick has also spent time living in Grand Lake, NB, Woodstock, ON, and the last 12 years in Fort McMurray, AB where he has worked as a millwright for Syncrude. No matter where Rick was living, he always managed to find himself in the company of the most amazing people who were more than just friends, they were his family. He loved to explore on and off of his motorcycle with his treasured friends Trevor, Randy, and Brian. When he wasn’t with his chosen family, he would spend time spoiling his grandchildren and driving his daughters crazy.

Rick is survived and missed by his daughters: Amber (Kevin) Arsenault of Hillsborough, Kendra Arsenault of Moncton and Ashton (Derrick) Beardsworth of Riverview; his brothers: Ernie, Frank, and Pete Gallant all of Ontario; his sisters: Sharron Arsenault and Christine Gallant both of Saint John and Lorraine Gallant of Summerside, PEI; adored grandchildren: Hannah, Daelin, Jax, Frankie, Renwick and several nieces and nephews.

Besides his parents, Rick was predeceased by his wife Diane (Huffman) Arsenault; his brother, Joseph and his sisters Vi, Dorothy and Freda.

Arrangements have been entrusted to the care of Salisbury Funeral Home (372-4800), 3350, Route 106, Salisbury West, NB, from where visitation will be held on Monday, June 13th from 5pm until 8pm. A Celebration of Rick’s Life will be held on Tuesday, June 14th at 11am from The Salisbury Funeral Home Chapel. Interment will be held in the Maplewood Cemetery at a later date. If desired, donations made to the Moncton Hospice Albert House would be appreciated by the family. Online condolences and donations may be made at www.keirsteads.ca