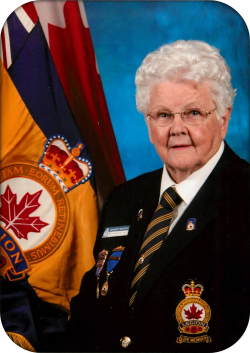 Margaret (McHale) Mechefske, of Salisbury, formerly of River Glade, passed away Saturday, June 4, 2022 at Albert House. Born in River Glade, NB in 1931, she was the 2nd of six children to the late Ernest and Elizabeth (MacDonald) McHale.

Margaret spent most of her working life in accounting and office management. She spent three years in Royal Canadian Air Force Uniform in Canada, and another four years out of uniform in Marville, France and Cold Lake, Alberta. She spent many years caring for her aged parents, and was a dedicated volunteer in The Jordan LifeCare Centre Inc, where she received a certificate and plaque for 2500 hours volunteering with the residents there.

Margaret was a life member of the Royal Canadian Legion with many years of service, twice president, and more than 10 years as treasurer and executive officer. She was also an active member of St. Jude's Catholic Church, Salisbury, where she had been Lector, Communion Minister, Parish Council Member and Catechism Teacher. Margaret was instrumental in establishing the first "St. Vincent de Paul" charitable organization chapter in Edmonton, AB and worked tirelessly there to see it grow and flourish where it still continues. She was active in sports; an avid bowler, curler, softball (on Senior Team - Moncton Hubsters - at age 12), president of the NB girls softball, ice hockey at old Moncton Stadium (with teams from Amherst and Sackville) but she never managed darts or golf very well.

Resting at Salisbury Funeral Home (372-4800) where visitation will take place on Wednesday, June 8 from 6 to 8 pm. The Royal Canadian Legion will conduct a tribute to a Veteran service at 5:45 pm with Parish Prayers and Sharing of Memories taking place at 7:30 pm. Funeral Mass will be held at St. Jude's Roman Catholic Church Thursday, June 9 at 1 pm with Rev. Phil Mulligan officiating. Interment in Our Lady of Mercy Cemetery.

In lieu of flowers, donations to St. Jude's Cemetery Fund or Jordan LifeCare Centre Inc. would be appreciated.

Family would appreciate masks being worn.