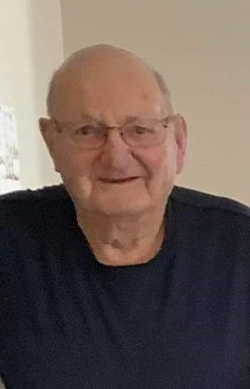 Stanley Walter Russell of Salisbury, NB passed away at the Moncton City Hospital on March 6, 2022 at the age of 91 years. Born in Cherryvale NB, he was the son of  the late H. Victor and Hilda (Ramsden) Russell.

Stanley was a retired mechanic from Trites Equipment after more than 25 years.  Stanley was a member of St. John's Anglican Church and attended Five Points Baptist Church.

Stanley enjoyed the local race tracks where he would help in the Pitts with his nephew   Doug Steeves and stepson Paul Lewis. Stanley was always fixing something.  He enjoyed snowshoeing with Lavina, fishing, and gardening.  Stanley would plant a large garden so he could share with the deer and raccoons.

He was predeceased by his wife Nellie Russell, seven brothers and three sisters, and his step-son Paul Lewis.

At Stan's request there will be a private family service held.  A graveside service will be held at Five Point Cemetary in the spring. Arrangements in care of the Salisbury Funeral Home (372-4800).

If desired, memorials to the Heart and Stroke Foundation, the Alzheimer's Society, or Five Points Cemetery would be appreciated.