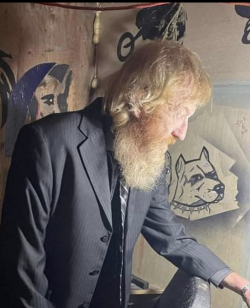 The family is sad to announce the passing of Stephen Andrew Rowe Jr., 56, of Scarborough, ON, who passed away unexpectedly in his home on Tuesday, November 30, 2021. Born in Moncton, February 21, 1965, he was the son of Margaret Harriman and the late Stephen Andrew Rowe Sr. (1976).

Stephen was a carpenter and cabinet maker by trade. His work included display cabinets for Tiffani’s, New York City; Pink Beach Hotel, Bermuda, and across Canada in his travels. He loved to plan a project. "That’s the best part." Stephen enjoyed reading and loved animals.

In addition to his mother, Stephen is survived and sadly missed by his siblings, Judy Rowe Stoneham of Bermuda, Elizabath-Ann "Betty-Ann" Rowe of Saint John, Michael-Ann Rowe of Manhattan, and Misty Rowe-Hobbs of Milton, ON; step-father, Jim Harriman; step-brother, David Rowe of Moncton; nephews, Barry, Nathan, Santana, and Killian. He will be missed also by his "other mother", Carol Dempsey; her son, Jerry Dempsey, Stephen’s lifelong best friend, and by Dorion Lauzon of North Bay, who called him "Dad".

Besides his father, Stephen was predeceased by his cousin, Paul Rowe.

A private memorial with family and friends will be held in the spring. Arrangements in care of The Salisbury Funeral Home (506-372-4800). Stephen would help anyone in dire straits, because many had helped him along the way, so in his memory, please, do something good for someone. Condolences may be placed online at www.keirsteads.ca.

… ‘I have travelled many miles and not all the roads were paved.’