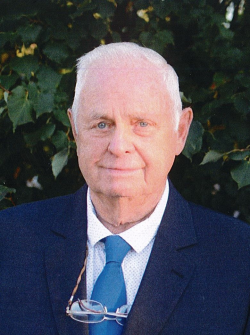 Hazen ALLISTER Lloyd, 88, of Moncton, NB and formerly of Petitcodiac, passed suddenly at his home in People’s Park Tower on Saturday, January 8, 2022 with his wife, Laura, at his side. He was born in Chipman, NB, the third son of the late Hazen and Elsie (Fulton) Lloyd.

Allister was an energetic businessman and a loving family man.  In his younger days, he became an avid woodsman, and remained so throughout his life. In the sixties, he gave his all to the Canadian Army in a survivals course. Later he became a professional scaler for Fawcett’s Lumber Co. & Son Valley Ranch LTD.During this time he also became a councilor for the Village of Petitcodiac.  In his early-married years, Allister managed the Royal Co-Operative in Fawcett Hill, and continued his support of the Royal Credit Union now called Advanced Savings Credit Union.

Not a man to sit still, Allister formed numerous companies: Lloyd and Graves Trucking, Boundary Creek Lumber Co., multiple land enterprises, lumbering crews, along with numerous real estate holdings. While being passionate in his entrepreneurial pursuits he always carved out time to play. Allister enjoyed dancing, music, a good card game, being outdoors, travelling, Sunday church, time at the lake, and being with his family and friends. Allister was a caring man who believed in honesty, fairness, and showed true concern for all.

Due to the announcement of Level 3 Covid-19 restrictions coming into effect Friday, Janaury 14, public visitation has been cancelled.

There will be a private family service with Rev. David Woodworth officiating. For those who wish to attend the service virtually, a web-link can be found on the funeral home website. Interment will be in Maplewood Cemetery at a later date. Arrangements in care of The Salisbury Funeral Home (506-372-4800). In lieu of flowers, if desired, memorials to a charity of your choice would be appreciated.

Please click here to view our Facebook page, where the Service will be livestreamed on Sunday, January 16, 2022 at 3 pm.