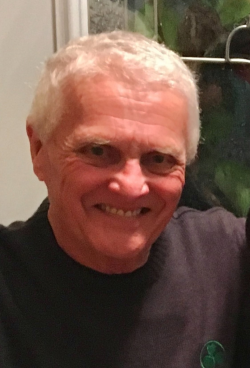 It is with deep sadness that we announce the passing of William Gerald White, age 81, of Little River, NB. Gerry passed away peacefully at his home with his family by his side on Friday, December 31, 2021. Born in Digby, NS, he was the son of the late William John and Florence (Benjamin) White.

He was predeceased by his very special friend Susan Bell; a sister Sheila Darrah, brother-in-law Patrick Darrah and nephew Jamie White of Prince Rupert, BC. He was a devoted father, a loving grandfather, a caring brother, a super cool uncle and a kind friend to all those who had the honor of knowing him.

He is survived and  will be dearly missed by his three children: Wendy White, Kathy White, Douglas White (Donna); beloved grandson Christopher - The Corporal; brothers Michael (Brenda) of Moncton; Jimmy (Christine) of Prince Rupert, BC and nieces; Caitin (Katie) of Moncton, Andrea of Kelowna other nieces and nephews and Great niece Bianca and Great nephew Jake of Prince Rupert, BC.

A special heartfelt thank you to Gwen Duggan who assisted with his care during his illness at home, as Gerry would refer to her as "His Nurse".

Gerry began his career in Television and Broadcasting in 1954 when television came to Moncton, known as CKCW and retired with ATV.  After his retirement he continued to work for many years with the television production of the Annual IWK Telethon for Children in which he took great pleasure in participating with.

On November 30, 2009, Gerry was recognized into the "Half Century Club" with affection and gratitude over a span of at least 50 years, devoting talent and energy to the highest quality from the Canadian Association of Broadcasters, (CAB).

Gerry loved his home in Little River, especially sitting by a campfire with his family and friends enjoying a nice cold beer and telling his "bull crap stories"as he would say.   He had a great love for nature, the wilderness, hiking, fishing, snowmobiling, ATV adventures and sitting on the riverbank down at the "Old Homestead". He also took great pleasure on his overnight ATV runs with the "Slow Pokes".

Gerry always looked forward to his many trips out to Prince Rupert, BC to visit his younger brother, Jimmy along with his family. He also shared a sincere passion and respect for the Indigenous Community and their Culture in the North West of Canada.

In keeping with Gerry’s wishes, a family gathering with special friends will take place at a later date in a celebration of his life - "Irish Style"!

As one of Gerry’s childhood friends said "He was Taller than he was Tall". How true!

We will miss you "Yo Bear"! Rest in peace Dad, Gerry and as you would always say "Let the Spirits Guide You".  "Just another trip around the sun - God Bless you all."

The family would also like to sincerely thank all the Extra Mural Care staff of the Driscoll Unit for their compassion and expertise in the medical care for Gerry.

In memory of Gerry, donations in his name can be made to The Canadian Wildlife Federation or Ducks Unlimited Canada, both of whom he supported for many years.