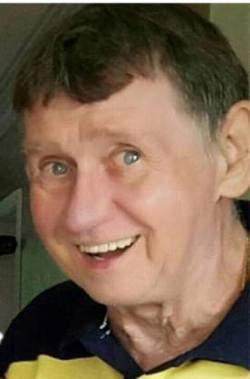 Interment will be held for Gary Lee Cameron, September 28, 2022 at 2 pm at the Maplewood Cemetery, Petitcodiac.

We regret to announce the passing of Gary Lee Cameron at home in River Glade, N.B. December 23rd, 2021 at the age of 75.

Gary was a proud member of the Royal Canadian Legion Branch # 41, Petitcodiac, NB where he received his 50 Year Membership recognition in 2016 as well as being a 40 years plus member of the Air Force Veterans Club, Moncton NB.

Gary loved spending time with his family, in particular his children and grandchildren, a good conversation with just about anyone, winning at crib, sharing stories and spending time at his camp.

In keeping with Gary’s wishes, there will be no service.  Interment will be in Maplewood Cemetery, Petitcodiac, at a later date.  Arrangements are under the care and direction of the Salisbury Funeral Home & Crematorium (372-4800).

For those who wish to do so, donations may be made to the Canadian Cancer Society.

Messages and memorials in memory of Gary may be directed to:  www.keirsteads.ca