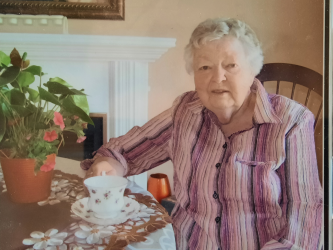 It is with great sadness and deep loss that we announce the passing of our beloved Mother, Thelma Ferne Harris on November 3rd, 2021 from Petitcodiac NB. Our Mom was born on August 12th, 1926 in Windsor, Carlton County, NB, widow of Paul Leroy Harris, daughter of Basil and Dora (Shaw) Trecartin.

Mom always put her family first. She will be greatly missed by all her family and her many musical and jam session friends. She was widely known for her musical talents and especially her yodelling.  Mom was a former member of the Women’s Institute and TOPS. She enjoyed knitting, clogging and her cats.

Resting at Salisbury Funeral Home, 3350 Route 106 (372-4800) visiting will be Saturday, November 6 from 1 pm until the time of service at 2:30 pm with Pastor Mike Orser officiating. Interment at Upper Hainesville Cemetery at a later date.

If desired, memorial donations to SPOT or a charity of choice would be appreciated by the family.

Please click here to view our Facebook page, where the Service will be livestreamed on Saturday, November 6, 2021 at 2:30 pm.