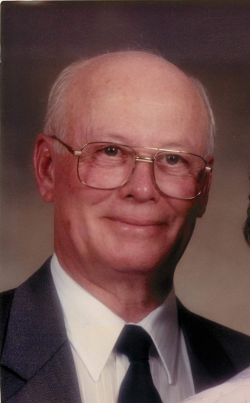 Everett Irvine O'Blenis, 95, of Salisbury, passed away at his home with his family by his side on Thursday, October 28, 2021, to be reunited for eternity with his wife Dorothy (Harris) O'Blenis.

Born in Salisbury, he was the last surviving member of his immediate family, being predeceased by his parents, Irvine and Minnie (Lewis) O'Blenis, and siblings, Lauranna "Sis" Bleakney, Lamonte, Bennet, Garnet, and Ronald O'Blenis.

Everett retired from Chrysler Canada where he worked in the parts department for 31 &  ½ years. Before that he served in the Canadian Armed Forces during the Second World War. He was a member of the Salisbury Baptist Church serving in many capacities over the past 60 plus years. He enjoyed many winters in Florida with Dorothy, camping with family, traveling throughout and across Canada numerous times, golfing, hunting, fishing, playing and watching hockey and baseball, playing cards with his family and spending quality time with his children, grandchildren and great grandchildren.

Resting at Salisbury Funeral Home from where visitation will be held Monday, November 1, from 6 to 8 pm. A Celebration of Life will be held at the Salisbury Baptist Church on Tuesday, November 2 at 2 pm officiated by Rev. Dr. Terry Atkinson. Due to Covid-19, masks and proof of double vaccinations are mandatory to attend and will be checked at the door. Interment will be in Pine Hill Cemetery for family only.

Special thanks to the Department of Veteran Affairs, Extramural, Alma Simmons and his network of neighbours.

If desired, memorials to the Salisbury Baptist Church Building Fund or a charity of choice would be appreciated.

Service will be livestreamed from the salisburybaptistchurch.org facebook page.