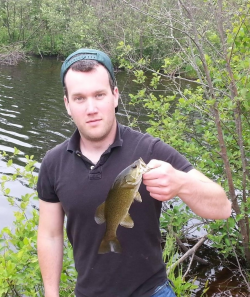 Logan Michael Peter Howatt, 32 of Petitcodiac passed away September 16, 2021. Born in Moncton, February 24, 1989 he was the son of Terri (Young) Howatt and the late Randy Howatt.

Logan enjoyed walking trails through the woods and found beauty in everything he saw. An incredible outdoorsman, he loved hunting, fishing and walks with his dog Otto. He also enjoyed other great passions of hockey, drawing, working on his car: '79 Dodge Aspen (a project car given to him by his dad), video games, kayaking, reading, four wheeling and even found a new one in cooking, all of which he was amazing.

Beloved son, brother, uncle, grandson and friend to all. His connection with his nieces was unlike most, he loved them all as if they were his own. You could trust him with any secret you had, a person who would find the good in anyone and was a very talented man.

He will be sadly missed by his mother Terri (Young) Howatt, sister Angel Howatt (Kyle Edgar), Havelock; brother Tavden, Petitcodiac; nieces Arya, Emersynn and Brynlee; grandmother Sylvia (Greening) Howatt; his best friend and his shadow Otto, and several aunts, uncles and cousins. He is predeceased by his father Randy and grandparents Fred and Louise Young and Doug Howatt Sr.

There will be a private gathering of family and close friends at a currently undetermined date.

If desired, donations to the New Brunswick Wildlife Federation, P.O. Box 549, Moncton, NB E1C 8L9, would be appreciated by the family.