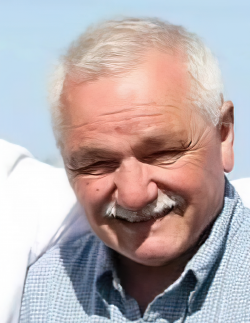 George Butler, 65, of Boundary Creek, passed away at The Moncton Hospital on August 27, 2021 with his favourite person in the world by his side, his daughter Stacey. George was born to George (Sr) and Margaret Butler on April 14, 1956, near Rogersville, NB.

He was a good old country boy until he moved to the big city, where, at the age of 19, met and fell in love with his first wife. (We’ll call her Karen for obvious reasons). They were married in December, 1975 and his first and only child, Stacey Butler, was born in July of 1976. You do the math. Shockingly, that marriage didn’t last very long. Luckily for George, there was something about him that seemed to attract the ladies. Many of them were crazy, but that’s another story for another day.

In 1978, George began his 32 year career with the Moncton Fire Department. Those were the good old days when your qualifications didn’t really matter and it was all about who you knew. George went on to save many lives throughout his career. He was a damn good first responder but he ultimately paid the price for a career that takes such a toll on so many. He thoroughly enjoyed pranking his coworkers at the station. Some of his shenanigans at the fire department are still talked about to this day with new trainees. Scare tactics? I guess we’ll never know. If you ask any of them about working with George, most of them all say the same thing: there was never a dull moment at the station working with George. He made many lifelong relationships throughout his career even after retiring in 2010 at only 52 years old, he remained close with several of them right until the end.

His daughter would like to personally thank the following firefighters for their sincere and lasting friendships to both herself and George. These guys far surpassed the definition of "coworker" a long time ago and are truly considered family. Al McNutt, Brian Gaudet, Dave Wood, Maurice LeBlanc, and Paul MacQuarrie.

George was mostly known for the size of his heart, which was larger than life. He was a self-made millionaire more than once in his lifetime. He gave away every dollar he ever made to anyone who needed it more than him. The list of charities and people that George helped would be long enough to write a very thick book. George was a living legend. Although his body is no longer here with us, he will forever live on in spirit and through his daughter Stacey who is a carbon copy of him, no matter how hard she tried to deny it.

George is survived by his only child, Stacey, who loved him more than life itself, even if he drove her crazy, which most days, he did.; his son-in-law, Cory Bembridge, who he always referred to as his favourite son-in-law, even though Cory was his ONLY son-in-law; one and only grandchild, Jayme Warren (the day she was born was the day he started worshipping the ground she walked on); Jayme’s boyfriend, Joe, who he referred to as "his" motorcycle parts guy, even though George didn’t own a motorcycle; step-daughter, Jessica Gillis who he acquired through wife #2; Tammy Noade (Adam) who was like a step-daughter, acquired through girlfriend # 167 (give or take a few); brothers Paul (Fran) of PE, Wayne (Tamara) of ON, Donald, of Moncton; three favourite siblings, his sisters who George was close with, always spoke of in the highest regard, whom he loved dearly and who could do no wrong in his eyes, Diane Shields (Dale) of PE, Ruth Cummings (Elvin) of Newtown, and the baby of the family who George had a real soft spot for, Patsy Dunstan (Mike) of Havelock; many nieces and nephews who he loved dearly; and his four furry friends, His dog Hunter, Stacey’s three Newfoundland dogs, Rosco, Daisy, and the one he referred to as "his" dog, Little Lulu.

Besides his parents, George was predeceased by four brothers, Bobby, Johnny, Billy, and Ricky.

If desired, memorials to the charities George helped raised many funds for through the fire department: IWK or Muscular Dystrophy would be appreciated.

Please click here to view our Facebook page, where the Service will be livestreamed on ednesday, September 1, 2021 at 1 pm.