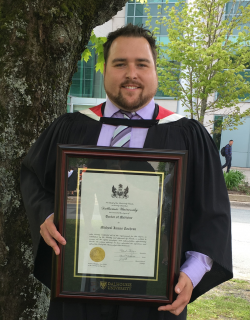 Following a brief illness, Dr. Michael James Cochran passed away with his family by his side on Aug 6, 2021 at Ottawa General Hospital.  Born on July 17, 1982, Mike was the son of Joan and the late William (Billy) Cochran of Boundary Creek.

His parents were huge supporters throughout his life. Following his Dad’s passing, Joan continued to be his biggest champion.

Mike leaves behind 3 beautiful children that he loved beyond measure, Jacob, Audrey and Emma and the mother of his children Ashley Stewart.  He enjoyed nothing more than spending time with them and was so very proud of the amazing people that they are becoming. He has passed on his love of sports, nature and family.

He is also survived by a best friend and identical twin brother, Matt (Brittany) Cochran and recently became an uncle to Baby Allie, a role he was very proud of.

He will be missed greatly by aunts, uncles, cousins, close friends and colleagues. He holds a special place in the hearts of Uncle Steevie and Aunt Cindy whom the boys spent so much time with while growing up.

Mike had a passion for helping others and devoted his adult life to pursuing education that would allow him to do just that. He graduated with a Chiropractic degree in 2010. After working for several years, he made the decision to return to university. He obtained a Degree in Medicine in 2016 from Dalhousie University and then went on to specialize in Orthopaedic Surgery. He recently passed his National Exam and was looking forward to a Fellowship in Arthroplasty and Sports Injury. His plan was to return to NB to be closer to his children.

Mike’s generosity, big heart and soft spoken nature will be missed by so many.

If desired, donations to a Living Memorial for his Children would be appreciated.

A sincere thanks to Ottawa General Hospital ICU Second Floor for the care given to Michael.

Please click here to view our Facebook page, where the Service will be livestreamed on Saturday, August 14 at 11 am.