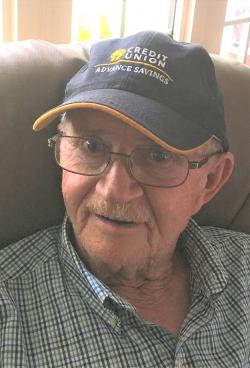 Gerald "Jerry" Gogan,77, of Petitcodiac passed away Wednesday, June 23, 2021 at the Moncton Hospital after battling pancreatic cancer. Born and a lifelong resident of Petitcodiac he was the son of the late Gerald "Tommy" and Myrtle (Steeves) Gogan. Jerry graduated from Petitcodiac Regional High and then began a 35 year career with the CNR retiring as a machinist and while there was active in their First Aid Program. Throughout his lifetime Jerry dedicated every waking moment to bettering his community, province and the planet. He served as a guide for 14 years with Fundy Hiking and Nature Tours, was a Councillor with the village of Petitcodiac for 20 years, Deputy Mayor and recently stepped down as its Mayor, only to be elected back to council in failing health but with determination to keep improving his beloved village. He was a founding member of the Petitcodiac Sportsman Club, Former Board Member of Fundy Model Forest; Former Board Chair of: Westmorland /Albert Solid Waste, Kodiac Place, Petitcodiac Public Library, Advanced Savings Credit Union and others. He was a member of the Petitcodiac Baptist Church.

Survived and sadly missed by his beloved wife of 56 years Leslie (Perry); his son Benjamin and his wife Tracy and cherished grandchildren Dylan, Sophie, Fletcher and Zayden all of Petitcodiac, his sister Nancy Gogan (Peter) and nieces and nephews. Predeceased by an infant son Dennis, sister Jeanie Mann, brother in law Bill Mann and his parents in law E. Raymond and Myrtle Perry.

The family will receive relatives and friends Saturday June 26 from 7-9 p.m. at Armstrong's Funeral Chapel, 33 Russell St Petitcodiac. The service to Celebrate Jerry's Life will be held Sunday June 27 at 3 p.m. from Petitcodiac Baptist Church with Rev. David Woodworth officiating. COVID 19 regulations, masks and limited capacity will be in effect.

Interment will be at Maplewood Cemetery.

If desired memorials in Jerry's memory can be made to a charity of your choice.