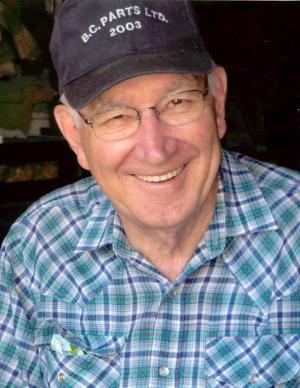 Malcolm was a hard worker. He worked at Blakney Concrete and Gordon Concrete until 1966 when he began work at CNR until his retirement in 1994 as a heavy equipment operator.

Malcolm loved to travel both in Canada and the U.S.A. to the steam shows. He loved to garden, hunt, fish, snowmobile, four-wheel, motorcycle, blue grass music, making maple syrup and country drives, especially in the spring to see the deer. In later years he looked forward to camping at "the lot" with the family. Malcolm was a fixer. If it was broke, he could probably fix it.

He courageously fought the debilitating effects of Parkinson's disease for several years.

Resting at Salisbury Funeral Home (372-4800) there will be a private family service officiated by Pastor Keith Lewis, with Covid restrictions in place. Interment at Boundary Creek Cemetery.

The service will livestream Sunday, June 13 at 2:30 pm on the Salisbury Funeral Home and Crematorium Facebook page.

The family wish to thank the awesome staff at the Jordan LifeCare Centre for their marvelous care that Malcolm received during his stay there.

If desired, memorials to the Boundary Creek Cemetery would be appreciated.