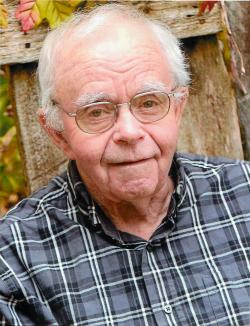 Owen Gilmore was born in Petitcodiac on March 6, 1939; he was the son of the late Owen E. and Edna Jean (Saunders) Gilmore. He passed away peacefully at the Jordan LifeCare Centre on Saturday, April 17, 2021.

Owen was an Electrician by trade and owned his own company "Gilmores Electric" for many years, mentoring and partnering with his son Mark. He was an esteemed member of the Petitcodiac community, volunteering with Minor Hockey and the Figure Skating Club for many years. Owen was an avid NASCAR #3 fan and friends and family will fondly remember road trips to the races. In the summer, he could be found playing baseball with The Boys and was known for his "legendary spinner pitch". He played well into his sixties. In the winter, Owen was a permanent fixture at the arena, coaching with his son, Mark and supporting Minor Hockey, as well as many hours watching his daughters figure skate. He loved watching the kids play hockey and basketball, often taking on the role of taxi and spending countless hours on the highway getting to multiple games in a single day. Owen holds the hearts of many of his kids' friends who considers him an Honorary Father. The Gilmores home was always open and changed many lives in doing so.

If desired, memorials to the Petitcodiac/Salisbury Minor Hockey Association or the Petitcodiac & District Figure Skating Club would be appreciated by the family.

Please click here to view our Facebook page, where the Service will be livestreamed on Friday, April 23, 2021 at 2 pm