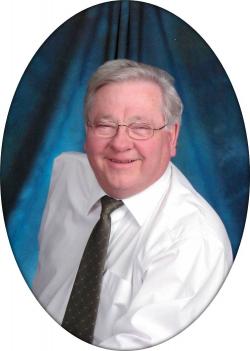 It is with mixed emotions that we share that Cyril Murray Hall passed into the presence of the Lord on Thursday, March 18, at the age of 73.

Cyril was born February 19, 1948 in Petitcodiac NB. Growing up on his parents’ dairy farm he learned the importance of hard work. He enjoyed going on milk deliveries with his father, and eagerly looked forward to stopping for treats along the way. He also grew a rich sense of humour which he carried throughout his life. Most importantly, it was in a household that chose to serve God first that his faith was fortified.

Cyril’s true passion was stock car racing. He lived and breathed the sport and knew nearly every detail about the history of drivers and their cars, both locally and back to the origination of NASCAR and beyond. Family vacations were often centered around racing somewhere, usually the Oxford 250 in Maine. Purely a fan in his younger years, he got involved in the sport as an announcer and spent 35 years behind the microphone. The excitement in his voice was borne out of a sincere love for the action on the oval, and his voice was heard at tracks throughout the Maritimes. He was honoured as an inductee to the Maritime Motorsports Hall of Fame in 2018 for his contributions to the sport.

He was generous to a fault, always willing to help someone in need of a ride, some cash or just a listening ear. He occasionally delivered sermons, and had a love for Christ and scripture. It is with this saving Hope that he knew his passing would only be a temporary parting of ways.

Until they meet again, he will be missed by his loving wife of 52 years Marilyn (Tingley), his sons Mike, Jim, daughter Sue, grandchildren Murray, Kayla, Emily, Holly, Sasha, Jericah, and Nathan and great-grandson Aaron. He is also survived and will be missed by Sister Marion (Gerry), Sister-in-Law Esther, Brothers-in-Law Ralph (Donna) and Roger, Sisters-in-Law Gloria (Herbie), Joyce (Jerry), Marlene (Bob), and Janet. He is also survived by his Aunt Orpha and many other family and friends far too numerous to list by name.

Cyril was predeceased by his beloved son Jeff, his parents Murray and Muriel, his sisters Geraldine and Sharon, brother Vernon, Sister-in-Law Bonita, and Brother-in-Law Mark.

Family will receive friends and relatives at the Salisbury Funeral Home, 3350 Route 106 (372-4800) on Monday, March 22 from 2 to 4 and 6 to 8 pm with Covid-19 restrictions in place. A private family service will take place Tuesday, March 23 with Rev. Dr. Terry Atkinson officiating.  Interment at Middlesex Cemetery at a later date.

If desired, memorial donations to the Cornerstone Community Church would be appreciated by the family at www.keirsteads.ca or send to 530 River Glade Road, Wheaton Settlement, NB, E4Z 3W3.