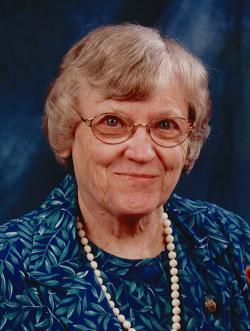 Georgia Wealthy (Haight) Foster, 95, went to be with the Lord on Thursday, May 21, 2020 at the Moncton Hospital. Born in St. George, NB she was the daughter of the late Curtis and Lottie (Marshall) Haight.

Georgia grew up in North Range, NS. On September 7, 1949 she married Reverend Hallett Foster and they began their married life on a farm in South Williamston, NS. (Hallett predeceased her in 2008) In 1959 the family moved to New Minas, NS where they were very involved in various ministries of church life. They left New Minas in 1967 when Georgia went to work on her PhT (putting hubby through) while he studied to become a Christian pastor.

Georgia faithfully served her Lord alongside her husband in several pastorates: Jeddore, Margaree Valley, Deep Brook, Smiths Cove, Clementsport all in NS and Lakeville, Good Corner, Bloomfield, NB. Through the years, Georgia served faithfully as teacher, choir member, CGIT leader, and in various missionary groups. She was a Dominion Life member of the UBWMU. She also shared their home with her mother-in-law, Lina, until her death in 1981.

After retirement, Georgia and Hallett made their home in Weymouth North, NS where they continued serving their Lord until 2005 when Hallett’s failing health forced them to move to Newtown, NB. At the time of her passing, Georgia was a member of the Havelock United Baptist Church, Havelock, NB.

Besides her parents and husband, Georgia was predeceased by her daughter, Annette Jonah; sisters, Beatrice and Florence; step-father, Warren Haight; and half-brother, Keith.

Arrangements are under the care of Salisbury Funeral Home, 3350 Route 106, Salisbury West, NB (506-372-4800). A graveside service will take place at Fairview Cemetery, Lawrencetown, NS at a later date.

For those who wish, remembrances may be made to the Havelock United Baptist Church or a charity of the donor`s choice.