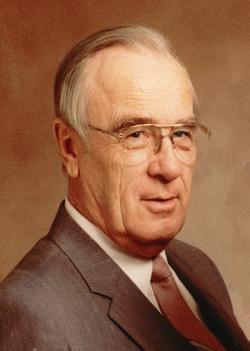 Rev. Leslie Hazen Hicks, 95, escaped the ravages of dementia and went to be with his Lord and Saviour on January 6, 2020. His persistent optimism and the love of his family sustained him to his final days on earth. Thanks to Cathy Hicks and his other caregivers at Kenneth E. Spencer Memorial Home.

Leslie was born to the late Harley and Edith (Killam) Hicks in Hicks Settlement near Havelock, New Brunswick on July 7, 1924. He was their seventh child, born on the seventh day of the seventh month. He grew up on the family farm. As World War II began, he worked with his father building housing in Moncton for British airmen who trained in New Brunswick.

Leslie trained for pastoral ministry at Bethany Bible College (now Kingswood University). He graduated from Bethany in 1950, marrying Aleen Esther Smith on June 7th of that year. Together they raised three children: Gary, Donald and Nancy.

Leslie loved to preach the good news of Jesus Christ. He preached almost weekly for 62 years, until age 88. He enjoyed building houses, constructing more than ten homes and church buildings over the years. He enjoyed gardening. During the 1970s he taught several Bible courses at Bethany Bible College.

He is survived by his sons Gary (Connie) and Donald (Brenda) and daughter Nancy (David) Cruickshank; also his grandchildren Shannon, Aleen (Josiah), Moriah, Kayla and Kelsey (Drake), and great-grandchildren Ramaira, Caleb, Samuel, Abigail and Steven. He was preceded in death by his wife, his parents and all nine of his brothers and sisters.

Visitation will be held on Wednesday, January 8, 2020 from 4 – 7 pm at Salisbury Funeral Home, 3350 Route 106, Salisbury West, NB. The Celebration of Leslie’s Life will be held on Thursday, January 9 at 2:00 p.m. at the same location. Interment will be at the Butternut Ridge Wesleyan Cemetery, Havelock. If so desired, memorials to a charity of your choice would be greatly appreciated. Online condolences for the family may be shared at www.keirsteads.ca.