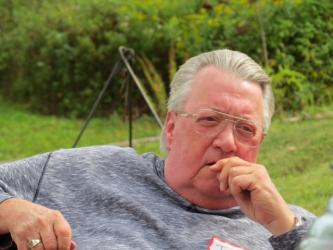 It is with the greatest sadness that we announce the peaceful passing of John Ferguson on Saturday, January 23, 2021 at the Moncton Hospital in the company of his great love, Wendy MacWilliam. John and Wendy shared more love and laughter in their sixteen years together than many do in a lifetime.

John was the dear father of Bethany and David Duivesteyn of Grimsby, ON, Sarah and Andrew Collins of Verner, ON, and Rachel and Nicholas Arcari of Hamilton ON. Grandfather of Gabriella Collins, Elizabeth (Bitsy) Collins, Domenic Arcari, and Harrison Arcari. He loved them dearly and was endlessly proud of them all.

Lovingly remembered by Jilanna Eagles and David Watson of Fredericton, Beth Jonah and Josh Newcomb of Riverview, and her daughters Jordyn and Audrey, and Emily Eagles and Brenda Comeau of Hanwell, and their children Cody and Ruby. John brought a lot of love into all of their lives.

John is survived by his brother Michael and Norma Ferguson of Cambridge, and his brother Paul and Mary Ferguson of Newmarket.   John was proud of his nieces and nephews. He loved them and always beamed when they called him Uncle Buck.

John is loved and missed by his fur boy, Jed.

John was predeceased by his parents Clark and Mardell (Pratt) Ferguson, his "go to" guy, his brother Clark P. Ferguson, and his sister-in-law Margaret (Trim) Ferguson of Chatham, ON.

Born in Galt, Ontario on April 21, 1949, John was one of four children who made their mark on the neighbourhood. He always remembered great times, great pranks, and lifelong friendships from his time in Galt and at the family cottage in Muskoka.

Most of John’s career was spent in banking. He worked throughout Ontario, Prince Edward Island, and New Brunswick, finally retiring after twenty-five years at Royal Direct in Moncton. He had a wonderful family of friends at Royal Direct who remember him for his radio voice, the way he lit up a room, and the ways he always brightened their day.

John was blessed to have countless friends far and wide. He was a joker, a prankster, and truly loved people. He cared deeply for his friends and was keenly interested in each of their family members, each of their pets, and what everyone was driving. John was an avid NASCAR fan and had spent many years driving and racing cars himself at Cayuga and Merrittville.

He liked nothing better than cruising in his black 1991 Corvette on Saturday mornings. This would usually include a trip to Canadian Tire to add to his stock of car care products. John spent many happy hours polishing his cars. Long before the Vette, his daughters remember a Pinto that went unwashed for fear it might fall apart, and a back-firing Chevette that carried him back and forth to PEI in between embarrassing pick ups at the high school in Saint Andrews.

John loved the property he shared with Wendy in Salisbury. Happiness was mowing the lawn on his Cub Cadet with his earbuds in, singing at the top of his lungs and hitting random objects in his path. He also loved sitting on one of the decks, waving at all the neighbours, and soaking up Mother Nature’s beauty. Life was good to the Big Guy.

If you knew John, keep smiling and telling his stories. John loved listening to music and the Traveling Wilburys’ song "End of the Line" was one of his favourites. Listen to it and think of him.

Due to Covid-19 restrictions there will be no funeral. Cremation has taken place. Burial will take place at a later date at Pine Hill Cemetery in Salisbury. Arrangements are in the care of Salisbury Funeral Home.

Donations in John’s memory can be made to Pine Hill Cemetery in Salisbury or to the charity of your choice.