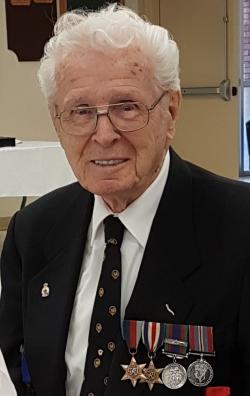 It is with sadness that the family of John Lewis Campbell, 98, of Sussex, NB, announce his passing on Monday, December 14, 2020 at the Moncton Hospital. Born in Salisbury, he was the son of the late Kenneth A. and Mary E. (Bleakney) Campbell.

John served in World War II as the tail gunner in a Lancaster Bomber, a member of the Pathfinders Squadron. He was a member of the Caterpillar Club, which recognized those whose lives were saved by a parachute. Membership was signified by a small silkworm pin and John’s pin had red eyes, indicating their plane was on fire when they jumped.

He spent many years in the oil refining business in Ontario, New Brunswick and Newfoundland. He owned a grocery store, operated Grandad’s Campground, and worked at the former Jordan Memorial Home in The Glades, NB. In his spare time, be bought and renovated several homes where he and his wife lived.

John loved to play music, sing and entertain at every opportunity. He played keyboard, fiddle, mandolin, guitar, and was especially good at the harmonica. He always had a case full of harmonicas in every key in the trunk of his car. He encouraged the family to play along with him. He was a member of the Silverado’s in Sussex and played music with the Happy Go Lucky Fiddlers. He was a member of the Royal Canadian Legion for over 75 years and invited family to the Remembrance Day Ceremonies and dinner at the legion for several years.  John lived life on his own terms, and he remained sharp of wit and fiercely independent to the end.

Arrangements in care of The Salisbury Funeral Home (372-4800). A private family Graveside Service will be held at The Maplewood Cemetery, Petitcodiac, NB at a later date. If desired, memorials to a local foodbank would be appreciated.