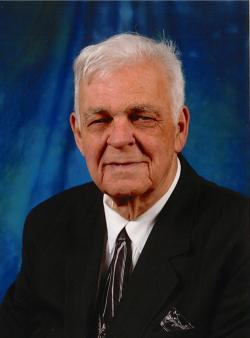 Robert "Bob" Charles Richards, 84, of Elgin, formerly of Woodstock, passed away at the Moncton Hospital on Sunday, November 29, 2020. Born in Lewisville, he was the son of the late Edgar and Bertha (Bishop) Richards.

After graduation, Bob joined the Royal Canadian Navy, where he served for five years. He then studied at UNB, earning two degrees to become a teacher. He enjoyed teaching for many years, working in Chipman, Petitcodiac, before moving to Woodstock where he spent the remainder of his working life as a high school physics teacher. He was a compassionate teacher who genuinely cared for his students. He also taught many young drivers in Woodstock through drivers-education, and drove the bus for Carleton Manor Seniors Citizens. He enjoyed curling and volunteering for St. John Ambulance. Bob was very involved at St. Luke’s Anglican Church in Woodstock, serving as a choir member and warden. Bob had a great love of music, and enjoyed listening to, and singing various styles of music including opera. He was very fond of singing in choirs, most especially the "Woodstock Barber Shoppers".  In 1999 he retired to Elgin for a simpler lifestyle and was a member of St. Andrews Anglican Church in Petitcodiac.

In addition to his parents, Bob was predeceased by his brother, Donald Richards; and brother-in-law, Laurie Tilton.

The family wishes to extend their sincere gratitude for the care and compassion Bob received during his time at The Moncton Hospital. All of the doctors and nurses were incredibly kind.

Due to Covid-19 restrictions, a Celebration of Bob’s Life will be announced at a later date. Arrangements in care of The Salisbury Funeral Home (506-372-4800). If desired, memorials to the Canadian Cancer Society or a charity of your choice would be appreciated.