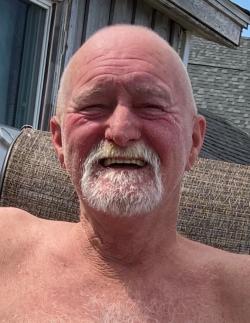 It is with great shock and sadness we announce the sudden passing of Barry Grant Arbeau on October 8, 2020 at the age of 63.

He is survived and sadly missed by his very tolerant (but spoiled) wife, Darlene (MacPherson); his amazing children, Jodi Burchill (Neil –known as "Norm" by Barry), Michelle, David (Hannah), and Chelsey  (Cory Chown). His most favourite people in the world were his grandchildren, Kaitlyn, Owen, Colin, Delia, Katelynn, Aaron, MacPherson, Jonah, Elicen, Alexandra, and Sylver.

Barry was predeceased by his two brothers-in-law, David and Douglas MacPherson and father-in-law Gerald MacPherson.

His home, for the majority of his life, was next to the family farm, but in later years he developed a great love for Caissie Cape, where he enjoyed his summer home from April to October. After many years of using his fists for hammers as a mechanic, he went all "Hollywood" and became one of the top car-salesmen at Lounsbury’s Moncton. Barry loved driving and restoring old cars and loved to ride his Harleys. He always said a bike is not a bike unless it’s a Harley Davidson. And the best car, according to Barry, is a Chevrolet.

Barry was a social person and would help anyone in need. His request to become a tissue donor was fulfilled.

Due to Covid-19 restrictions, a Celebration of Barry’s Life will be held at a later date. Arrangements are in care of Salisbury Funeral Home (372-4800). If desired, memorials to the Heart and Stroke Foundation, or a charity of your choice would be appreciated.

Service Location
Celebration of Life Service At a Later Date
Requested Charity
Heart and Stroke Foundation, or a charity of your choice