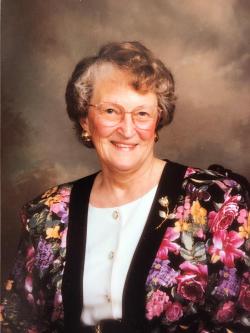 Pauline Elizabeth McGibbon passed away at the Moncton Hospital on Thursday, March 26, 2020.

Pauline was born May 28, 1927 in Corn Hill, NB. She was the third child of Archie Brown and his wife, Mary McQuinn. In addition to her husband, Gordon, who predeceased her in 2005, and her parents, she was predeceased by her brother, Murray (1935) and two infant siblings, Margaret (1923) and Archibald (1932). She is survived by her daughter, Mary Jean Titus (Ivan) of Sussex; two sons, William Archibald McGibbon (Lois Chambers) and Peter Gordon McGibbon (Cathy Connors) both of Anagance. She is survived by six grandchildren, Ben (Jennifer), Hal (Marjorie), Jim (Maggie), Becky, Meaghan (Matt), Jesse (Mattea); four great-grandchildren, Jensen Titus, Mila and Stanley McGibbon, and her namesake, Pauline (Polly) Pennell. She is also survived by her sister-in-law, Eris MacIntosh and by several nieces and nephews. She was embraced by and grateful for the support of many cousins.

Pauline obtained her early education at the Anagance Ridge School and later graduated from Sussex High School and then attended Robinson Business College in Moncton. Following schooling, she was employed for four years by The Royal Bank of Canada in Moncton, prior to marrying her childhood sweetheart on June 11, 1949, and was devoted to him for 56 years. She drove a rural mail route for 20 years and did the bookkeeping for Gordon McGibbon Ltd.

She was a faithful member of the United Church of Canada and a life member of the U.C.W. In years past she was active in the Sunday School and a leader of C.G.I.T. She was a charter member of the Anagance Senior Citizens, and she was a volunteer for the Canadian Cancer Society.

During her life, she enjoyed handwork, especially knitting and quilt making for her grandchildren. She enjoyed travelling, motoring twice across Canada and to Alaska. She traveled to Frobisher Bay, Europe, Newfoundland, the World’s Fair in New York and several trips to Florida. After her husband’s passing, she completed a McGibbon genealogy and also wrote her memoirs "My Journey". She blessed her family with unconditional love and appreciated life. She was kind and generous and was often a "listening ear" to those with serious concerns. Her passion was wood heat and she fired a wood furnace daily during the winter months. She held fast to her independence, even after a major stroke in March 2011.

The  family will attend a graveside service at the Anagance Cemetery with Rev. Stephen Brown officiating. A Public Celebration of Pauline’s Life will be announced at a later date. If desired, memorials to a charity of your choice would be appreciated. Arrangements in care of Salisbury Funeral Home / Armstrong’s Funeral Chapel (372-4800).