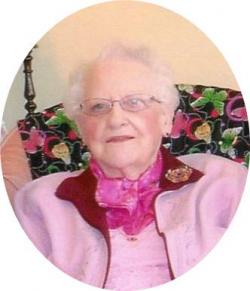 The death of Gloriana L. Hopper (Thorne), 86, occurred on  December 31st, 2019 at the Jordan LifeCare Centre. She was the beloved wife of the late F. Eldon Hopper and daughter of the late Beecher and Minnie (Taylor) of The Glades, N.B. She was born on July 26th, 1933 at Butternut Ridge, N.B., however she grew up at The Glades. Gloriana, devoted Mother to Arnold (Kathy) of Sussex, Ron (Homer Noble) of Torbrook Mines, N.S., Andrew (Helen) of Picadilly and Janet Hopper-Ansley (Stephen) of Penobsquis. Beloved Grammy to grandsons, Kris and Michael of Quispamsis and granddaughter, Natasha (Krista) of Moncton.

Gloriana was employed for 22 years at the Jordan Memorial Nursing Home as an Occupational Therapist Assistant. She was a long time and faithful member of The Glades United Baptist Church. During this time she was a Sunday School teacher, Vacation Bible School teacher, and President of the W.M.S. for two years.

Gloriana and her late husband F. Eldon Hopper of 61 years lived at The Glades until Eldon passed away in November, 2011. She then moved into Peoples Park Tower in January, 2012 before moving into the Jordan LifeCare Centre at The Glades in June, 2017.

Eldon and Gloriana enjoyed travelling throughout Canada and the United States; attending auctions, craft and yard sales. Gloriana loved to cook and entertain her family as well as making crafts, sewing, quilting and knitting.

Survived by sisters Shirley Robb, ON, Treva (Isaac) Rimney Edmonton, AB; sister-in-law Sheila Thorne of Minto, N.B. and by cousins, nieces and nephews. She was predeceased by brothers, Clinton of Petite Riviere, N.S., Floyd of Mississauga, ON and Elderic of Minto, N.B.; sister, Margaret Cameron of Huntsville, ON, mother and father-in-law Frank and Carrie (Geldart) Hopper of The Glades; brothers-in-law, Charles Cameron of Lindsay, ON., Gerald Robb of ON, Currie Smith and sisters-in-law Hazel (Hopper) Smith of The Glades, Thora Thorne of Petite Riviere, N. S.,  Doris Thorne of ON, nephew John Smith of Moncton and niece Doreen Prosser of Petitcodiac.

The family would like to extend their deepest appreciation and gratitude to the staff of the Jordan LifeCare Centre for the exceptional care provided to Mom.

If desired, donations to the Jordan LifeCare Centre or a charity of choice would be appreciated by the family.