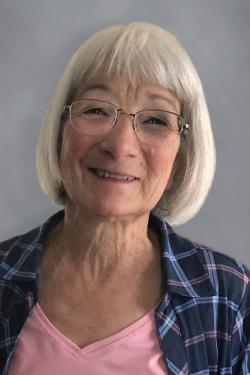 It is with heavy hearts and great sadness that we announce the passing of our dear wife, mother and grandmother, Linda Mullins, on the morning of Monday, September 23, 2019 at the Moncton Hospital after a brief illness.

Linda was born in Moncton, on March 5, 1946 and spent her entire childhood growing up with 4 younger sisters on the family dairy farm in Salisbury, NB.  After finishing high school in Salisbury, she worked at Eaton’s in the mail room with many of her graduating friends.  Her classmates described her in their yearbook as "Small, but Mighty", which could not have been more accurate.  Through mutual friends, she met her future husband, Ronald Mullins and they were married on December 16, 1967.  They would make two small moves within Moncton, before finally finding their dream piece of property in 1977 and building a home on the McFarlane Road in Berry Mills, where they have resided for the past 41 years.

Linda remained at Eaton’s until 1976, when her son was born.  A daughter would follow in 1977 and she would remain a proud stay-at-home mother, while taking night courses in accounting and book keeping. In 1994, she would begin working at accounting and running the office for Winning Ways health food store, until she retired in 2001.

Linda was a "doer" and a "fixer".  There was nothing that she would not tackle, from figuring out some obscure knitting pattern to fixing the lawnmower.  She had many hobbies that included gardening, both vegetables and flowers, knitting sweaters, dishcloths, socks, hats, mittens and anything else that she put her mind to for all her children and grandchildren.  She mended and fixed all our clothes and as a young woman, she sewed many of her sister’s dresses, including wedding and bridesmaid dresses.  There was nothing that Linda could not figure out.  She worked beside her husband in everything they did, whether it was beekeeping, cutting firewood or raising chickens and pheasants on their property.

Linda loved a good cup of tea, early morning Sudoku, walking in the woods, berry picking and cooking Sunday dinners every week for her family. She instilled family values, life skills and even survival skills to her children and her grandchildren.

Her place of solace over the past 8 years was to go to their trailer in St. Martin’s, NB.  Many hours were spent talking, laughing and walking on the beach with her children, grandchildren, family and friends.

Linda was predeceased by her parents, Evan and Ruth (Wortman) O’Blenes and her parents-in-law, Ed and Mildred Mullins.

If desired, memorials to Friends of the Moncton Hospital (Neuro Sciences Unit) or Pine Hill Cemetery.