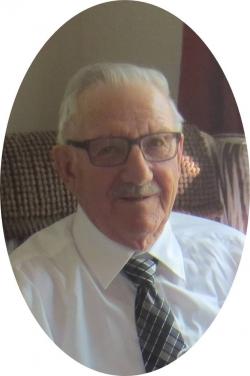 Delbert Russell Bannister passed away peacefully at the Sussex Health Centre surrounded by family on August 22, 2019. Born September 15, 1926 in Elgin, he was the son of Harold and Olive (Shaffer) Bannister.

Delbert worked in the woods for several people and with his Uncle Cecil in the sugar woods until he started as a mechanic in Sussex. In the 60’s, he went to Lounsbury’s Body Shop in Petitcodiac until 1974 when he took a job with the Bridge Crew - Department of Transportation in Sussex, from where he retired in 1989. Delbert was a member of the Petitcodiac Kiwanis and he enjoyed spending his time gardening, bowling, touring to visit new places and old, and attending the occasional party. His love for family and friends was almost as strong as his love for his horses and cats.

In lieu of flowers, donations made to the IWK would be appreciated.