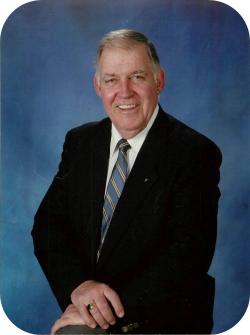 It is with sincere sadness we announce the passing of James Herbert Munro, "Jim", on August 10th at the Jordan Lifecare Centre, Riverglade NB, after a long journey with Alzheimer’s.

Early in his career in finance Jim worked in Halifax, Middleton, and Dartmouth, NS.   It was in Dartmouth that he met Carol and they began a life together, celebrating 61 years happily married on August 9th.  From Dartmouth  Jim accepted a position with Traders Finance that took him and Carol to St. John’s, NL, which was a long way from home for this young couple.   While there, Jim switched institutions and began working for the Bank of Nova Scotia.   Over his 25 years with Scotiabank he served several branches including, Moncton, Saint John, and finally Petitcodiac, NB.   Jim, Carol, and their 3 teenagers had become active in the community and so in 1977 Jim left the bank  to remain in Petitcodiac, and with Carol’s help launched Munro’s Insurance as a family business where they worked until their retirement almost 20 years later.

Jim  cared deeply about community and was committed to contributing toward its sustainability. He was instrumental in supporting the building of the Petitcodiac Arena, Petitcodiac Medical Centre, Kodiac Place Seniors apartments, and initiatives for Downtown Revitalization and served in several roles on their boards and committees once established.    Elected as a Village councillor, he held clear ideas and worked hard on projects for the long term health, safety, and vitality of the village.   Additionally Jim volunteered with the Minor Hockey League, St. John Ambulance, the Westmorland County Fair, and was regularly called upon to "Emcee" community events.

Beyond the municipal affairs, Jim truly enjoyed the challenges of provincial politics and was an active member of the Conservative Party of NB,  and over the years worked on campaign teams for several MLA’s and was treasurer for the Party for a term. He was also a devoted member of the Stephen’s Masonic Lodge No. 37, and St. James United Church.

Family and close friends will smile to recall the laughter and fun over projects, card games, parties, campfires, and fishing at the cottage that Jim and Carol built in Portage Vale, where  Jim dearly loved spending summers and weekends.  After retirement, they took their fun on the road eventually settling their trailer in a park in Shediac, where they discovered another fun-loving community. Jim loved to fish and enjoyed a number of special fly-fishing trips with good friends, but perhaps his favourite of all were his trips to the rustic fishing camp he shared with his brothers and their families at Chisholm’s Lake, in Guysborough County, NS.

Jim is survived by, his beloved wife, Carol (Miller) and children Laura (Norman) Hunter, Sackville, NB, Sandra (Doug) Kelly, Petitcodiac, NB, and Bruce Munro, Anagance, NB.  He will be missed by grandchildren: Ben & Natasha (Martin) Hunter, and their children Zachary and Avery; Hannah Hunter; Jarvis Kelly (Kendra MacDougall); and Jacey Kelly (Chad Gale).  Born in New Glasgow, NS in Jan 1935, he was the son of Mary (Oliver) and Henry Munro.  Jim will be fondly remembered by his sister, Matilda (Munro) McQuinn and his many cherished nieces, nephews, and in-laws.  Besides his parents, he was predeceased by brothers Robert, Harry, Lloyd, Donald, Theodore, and Charles.

The family would like to extend deep gratitude to the staff at the Jordan LifeCare Centre, for all the ways they have supported Jim and his family through his final days, with respect, care, and love.

Arrangements have been entrusted to Salisbury Funeral Home, 3350 Route 106 (372-4800) where visiting will be Wednesday, August 14 from 7 to 9 pm and from where the funeral will be held on Thursday, August 15 at 1 pm with Rev. Stephen Brown officiating. Interment at Maplewood Cemetery.

In the same spirit of giving that marked his life, Jim will continue to give to others by donating brain tissue to the Maritime Brain Tissue Bank for scientific research on Alzheimer’s.   Memorial donations can be made to the Alzheimer’s Society, Friends of the Jordan LifeCare Centre, or a charity of  choice.