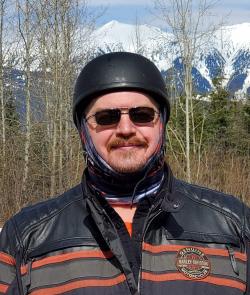 Brent Eldon Demont, 47, of Grand Prairie, passed away Monday, May 13, 2019 in Calgary, AB as a result of an accident. Born in Moncton, he was the son of Laurie and Janice (Killam) Demont of Harewood.

A graduate of Petitcodiac Regional High School, he enjoyed spending time at the camp, listening to country music, driving his motorcycle, and driving transport, which he did for more than 20 years.

Aside from his parents, he is survived by his daughters, Tracy (Nick) and Sarah; granddaughters, Sofea and Novah all of Moncton; brother, Mark of Harewood; sister Bethany Wheaton (Stephen) of Upper Canard, NS; the mother of his children, Heather as well as several aunts, uncles, cousins, nephews and a niece.

A Celebration of Brent's Life will be held from Salisbury Funeral Home's Chapel, 3350 Route 106, Salisbury, NB (506 372 4800) on Tuesday, May 21 at 1 pm with Pastor Stephen Wheaton officiating. Interment will be in First North River Baptist Cemetery.

If desired, living memorials to Brent's daughter's education fund would be appreciated by the family.